Hi everybody. Brian here. I know you’re hungry for Lemon Twigs merch. You’ve worn out that black Do Hollywood-era Ozzy logo shirt so much that you can no longer read what it says. Luckily, we’ve made some new shirts, available below. As if that wasn’t enough, the incredible artist Richard Sanchez made a limited edition poster for us which we’ll sign. Perfect to hang up in any room in your house. Link below. 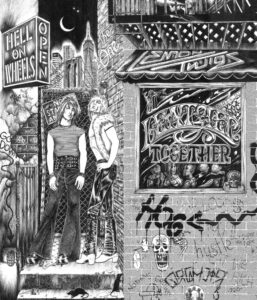 Songs For The General Public Out Now

A dream is something better than before. The Best is the dream to end all dreams. It’s close enough to smell, but always too far to taste. If you could bottle The Best, The Coca Cola Company would be stacking the shelves with it as we speak. Anything less than The Best ain’t worth a dime, so we think. But without something sweet and sticky that gives you pimples on your face, we’re all just sucking up air through a straw. Nothing’s better than what what has yet to come, and No One Holds You Closer Than The One You Haven’t Met.

Live In Favor Of Tomorrow

The Lemon Twigs have done it again with another shot of adrenaline straight into the vein of the American pop scene. “Live In Favor Of Tomorrow” is a euphoric dance in the clouds which brings you close enough to God to slap him five. Time is an antiquated illusion when you play this puppy loud. Judy Garland twerks on Galileo to the sound of jangly guitars and drumming we haven’t heard since Jerry Lewis jammed with Lars Ulrich at Woodstock 2069. Every-day horror is a day at the beach in the land of the infinite.
Is that a mushroom cloud, or the Buddha doing a cannonball at his holy summer pool party? These are the kinds of thoughts likely to ripple through your mind during the song’s relentless 3 minutes and 24 seconds. So take your shirt off and take a dive into infinity with The chosen Lemon Twigs.

“I saw a Dr. Phil where they were telling this kid that she’s gotta go back to school and stop being so rebellious, and then that was Bhad Bhabie. And she wasn’t a typical person, she wasn’t going to do whatever everybody expected her to do, she had a different dream for her life, and she was on her own sort of path, and I identified with that. And that was partially what spurred on the song.” – Mike

Here’s a track from someone who worked overtime in the House of the Bizarre, the great Tiny Tim. From his second record, produced by Richard Perry, who went on to be Nilsson’s right hand man. Someone who recognized him as the force of nature he was. Not just a novelty act. God Blessed Tiny Tim in 1968 with his first album, cut in 68 in Los Angeles. Tiny arrived by train. He was scared of flying but he took us to the stratosphere on that record. Next came Tiny Tim’s 2nd Album. The release was said to have been undercut commercially by the bootleg record Concert in Fairyland, which was recorded years prior to the first album under many different contracts, using many different names. It was shrewdly compiled and marketed by none other than Richard Perry’s father in law. Perry was apparently so upset by this, he ended his relationship with the guy, and sued him. When you hear the real second record, you can understand why. Masterful arrangements, dynamic song choices and inventive production which showed that Tiny was serious about his interpretations of both classic and contemporary songs, and communicated them in a way that was as relevant to 1969 as the goddamned Jefferson Airplane. I mean, listen to this song. The lyrics, written by Brill Building writer Roger Atkins (who also wrote words to It’s My Life by the Animals and The Kind Of Girl I Could Love by the Monkees), talk about a wealthy and well known man in the community, who bankrupts small businesses “like the perfect gentleman.” There’s a river and a street that bare his name and every stitch and inch of the community is his. The cover of the record features Tiny with his parents, Butros and Tillie. 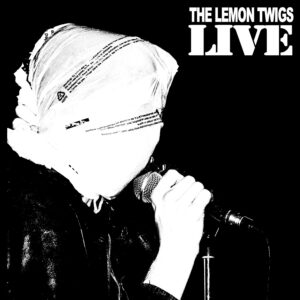 Compiled from recordings of The Lemon Twigs’ live performances in late 2018, early 2019 on the “Go To School” tour, here is The Lemon Twigs LIVE. If you close your eyes while you listen, you’ll experience EXACTLY what it would be like to go to a Lemon Twigs show wearing a blindfold.
The album is available exclusively on bandcamp. All of the proceeds will go to Coalition for the Homeless, who are helping NYC’s most vulnerable during this trying time and have been since 1981. For more information on them go to their website: www.coalitionforthehomeless.org

Hello, fans and friends. Welcome to our new blog. I don’t know how often we’ll post on this, and if I did know, I wouldn’t tell you. It’s about time I had a place to express my thoughts. Every once in a while I get one floating around, and it pays to write it down so it doesn’t go somewhere else. Hopefully these thoughts embed themselves into your consciousness, thus spreading my influence on the rich culture we’re all creating. I’ve always thought of myself as one of our time’s great thinkers and poets, and I think it’s about time the rest of you felt the same. All that aside, there’s a song by Phil Ochs that plays in my head just about any time something goes really wrong. Phil Ochs was a great songwriter. A contemporary of Dylan in the Greenwich folk scene who as well as having great admiration for his song craft was also a vocal critic of Dylan turning his back on social causes. There’s an interview of him criticizing Blonde on Blonde, saying that Dylan was letting his images get away from him. And as we all know, history proved him right, with Blonde on Blonde eventually earning its reputation as a hiccup on an otherwise impressive back catalogue. Cross My Heart. The first track on Phil Ochs’ lush (a great word) orchestral masterwork Pleasures of the Harbor. Phil saw the writing on the wall. After 3 great records in the folk tradition of solo acoustic guitar accompaniment, Phil saw what was happening in the music scene (and what was selling), and decided to take full advantage of the move from folk label Elektra to major label A&M. While Dylan expanded his musical palette by leaning on his early blues and rock roots, Phil in his pre-Bob Gibson college years was a clarinetist. He got into a classical bag. In the late 60’s those were basically your two options. Pleasures of the Harbor is of its time, before it and ahead of it, like all the best shit. He recognized the hope for change that was in the air, and knew like everything else, it’d come crashing down. He sums up the era to come on that first track beautifully.

“I don’t know, but it seems that every single dream’s painted pretty pictures in the air
Then it tumbles in despair
And it starts to bend until by the end it’s a nightmare

Through many small, insignificant struggles of my own, I’ve thought of those words. And it applies as much to our own selves as it does to our expanded, collective self. It applies to the General Public of then and now. I say listen to the song. The non hit of 67 that’s as uplifting as it is upsetting. But maybe more upsetting.

The Lemon Twigs editorial committee would also like to add that the final track of Pleasures Of The Harbor “Crucifixion” is a Kennedy assassination epic that rivals Dylan’s Murder Most Foul.

To quote an old showbiz saying, “The show must NOT go on!”

It’s with great disappointment that we announce the postponement of our 2020 tour. We know you wanted to see us, and we wanted to see you too. And they wanted to see us also. Not to mention them. But as we retreat back into ourselves and try to pick up the pieces, we drop our keys, and after our keys, we drop our glasses. And without our glasses, it becomes very difficult to find the pieces we were looking for. But I digress. I’d like tell you when the new shows will be, but I’m a lousy scientist, and an even worse doctor.

It’s with even greater disappointment that we move our record release date to August 21st. They say good things come to those who wait, and even better things come to those who wait longer. And then they tell you not to procrastinate. What kind of sense does that make? To try and make it up to you, we’re hard at work on another record. And expect some new tracks and videos in the meantime.

In times of global turmoil, I find it comforting to recall something the late great Abraham Lincoln once said. After that, I like to take a large ice cube out from the freezer and suck on it for a couple of minutes